This is an incomplete compilation of known hardware and systems that were developed by Norsk Data AS. The list contains both systems, boards and single items mentioned in documentation and other places. Links to online resources, references and to where hardware is located will also be included. 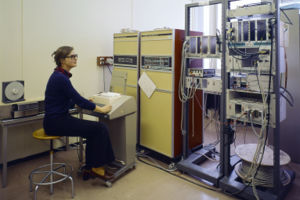 Testing electronics at CERN with a NORD-10.

There have been several (at least two) ways of numbering products so there might be some overlap between lists. An early standard used two to four digit codes for product numbers. For example :

For more see the list of 2 digit, 3 digit and 4 digit product codes.

Later on it seems the product numbers were turned into six-digit codes, for example :

For more, see the List of 6 digit product codes.

At the start of the PC revolution Norsk Data AS tried to keep up with the times and started to sell rebranded PC products. It also branched out into unix work stations like the Dolphin series ( might have been called Uniline in the beginning ).

There is a lot of different boards used in the NORD-1 computer. Most are numbered with a three digit code starting at 101 and at least going up to 504. The NORD-1 was one of the first computers to be constructed of integrated circuits instead of transistors. Almost all of the boards are built with the 74-series IC:s.

When the NORD-10 was designed the quality and professionalism shows off, solder mask, silk screen and a more compact design. The boards now have a print number and a product number. The known print numbers goes from 1001 to 1932 while the product numbers are in the range of 322000 to 322437.

This is a list of boards used in the ND-100 series computers based on the print number on the circuit board.

This is a list of boards used in the ND-500/5000 series computers based on the print number on the circuit board.

This is a list of boards used in the ND-5000 series computers based on the print number on the circuit board.

This is the beginning of a list of hard disks, floppy disks and other mass storage units used by Norsk Data. Most units is just re-branded units from other manufacturers