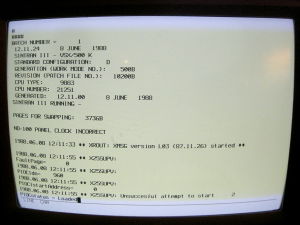 A booting SINTRAN III VSX/500 K on a ND-110 Satellite. Photo of the terminal connected to the console.

SINTRAN III is a real-time, multitasking, multi-user operating system used with Norsk Data computers from 1974. Unlike its predecessors SINTRAN I and II, it was entirely written by Norsk Data.

SINTRAN was primarily a command line based operating system though there were several shells which could be installed to control the user environment more strictly, by far the most popular of which was USER-ENVIRONMENT.

One of the clever features was to be able to abbreviate commands and filenames between hyphens, for example LIST-FILES when typed would ask you for several prompts including print, paging etc, you could override this using the following LI-FI,,, which would abbreviate the LIST-FILES command prompt and bypass any of the prompts. One could also refer to files in this way, say, with PED H-W which would refer to HELLO-WORLD:SYMB if this was the only file having H, any number of characters, a hyphen, a W, any number of characters, and any file ending.

In case the user wanted to actually edit a new file called H-W:SYMB (with no automatic expansion to match an existing file), the file name would have to be enclosed in double quotes, i.e. PED "H-W:SYMB". The double quotes automatically created a new file. The other common way to create a file was to use the SINTRAN command CREATE-FILE.

The abbreviation concept saved quite a lot of keystrokes and would allow users a very nice learning curve, from complete and self-explanatory commands like LIST-ALL-FILES to L-A-F for the advanced user. (The hyphen key on Norwegian keyboards resides where the slash key does on U.S. ones.)

This section lists the releases of SINTRAN III.

N-version
this version has Y2K patches.