There is one major collection of Norsk Data gear and information that dwarfs every other collection. It is the Norsk Data collection housed in Telemuseum storage in Fetsund. It consists of several parts.

Since 2018 Telemuseum is a part of the Norwegian Museum of Science and Technology.

The collections of Telemuseet is vast but here we only present the Norsk Data AS collection.

There are about 30 pallets with machines and documentation spread around in the storage. Most of it is collected in one area but it is worthwhile to go around looking for the few hidden ones. 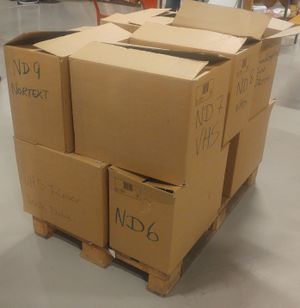 In a room inside the inner hall there are eight grey cabinets with a lot of pictures. There is no direct system, the pictures were just put into the archive as it was taken.

A small cabinet with drawers of slides. It looks like it is material for courses or presentations. I only checked a few pictures.

Another small cabinet that contained some layout films and posters. Just pulled out some drawers to check the content.

Wall of floppies, a lot of goodies here.

This is literary a wall of floppies, two layers deep. There are a few 3.5", some 5.25" but most of it is 8" floppies. It seems like it is mostly copies of software distribution floppies.

A peek into one of the drawers with source code.

Four red archive cabinets, full of source code floppies. There are also some tapes and even a 9" disk pack. This is one of the more interesting parts of the storage in Fetsund.

For this visit five persons showed up. We had permission to visit the storage between 9.30 and 15.30. The visit started by a tour of the facility, it was very interesting to see the collections. After the round trip we were asked what we would like to do. Since we had no real plan it was a bit disorganized in the beginning, but we started to go through a pallet with manuals, just laying them out on a table and taking a picture of them, then putting it away again. Just that pallet took half a day for three persons.

After the first pallet we took a break and I went on a random exploration among the collections, looking at pallets, machines and shelf's of diskettes. Since the mechanism for the pallet storage was broken some of the more interesting stuff were out of our reach.

The poking around gave result, I discovered that the red cabinets were the source code archive, approximately 3000 floppies, tapes and even a 9" disk pack marked "211999 B00 MOTIF/X WINDOW DEVELOPMENT KIT FOR ND5000". In a mixed stuff pallet there were some really old manuals, SINTRAN II and a preliminary draft user manual for SINTRAN IV in the same box.

I also managed to get some pictures of a few of the machines in the collection.

Too soon the day was ending and we had to wrap things up. But we had at least got an idea of what was stored in Fetsund and what to do on the next visit. We just have to go back and the next time we will do a lot more floppy copying. If not for any thing else, I need to go back to return the ten manuals I borrowed.