169 Cambridge control, is a card that is used in the NORD-1 CPU. 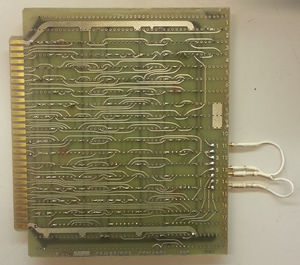 It is a controller for interfacing the EXPANDARAM-18 core memory.

The card is made in the standard NORD-1 card format.

The logic diagram is documented in drawing 2A69.[1]

There are no switches or indicators on this board, but there is a strap field on the front. The four top positions are grounded and the four inputs have pullups.

Counting from the top :

Preliminary : The function seems to be to translate and ensure the timing of the control signals are correct. To do that it uses four JK-flip-flops (74107) and two one shots (74121) along with logical gates.

The card has a free running oscillator at about 2.5 MHz consisting of four inverters (3C) and RC circuits.

This list contains the logic circuits used, passive components are not listed.