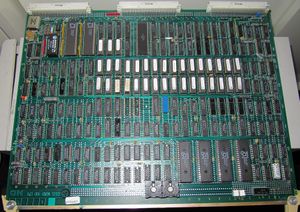 3033 is the ND-100 CPU with CX option board. It contains the CPU, bus arbitration logic, memory control and other subsystems. It also has the Real time clock and the I/O for the serial console.

As seen from the top, when the card is in the card crate (components on the right hand side).

General: the A and B connectors are used for I/O, the C connector is used for the ND-100 Bus. On this CPU module, the B connector connects to the memory management module in slot 2.

I/O Devices on the card

The current loop interface (AKA Terminal 1 AKA console), located on the CPU board, has device number 300. The device register address range is 300 - 307.

The real-time clock on the CPU board has device number 10. The device register address range is 10 - 13.