Little is known about the NORD-2B. It appears to have specs similar to the NORD-1, with 4kw - 16kw core memory. It was a simplified and less costly version of the NORD-1. A substantial number of NORD-2B computers were installed at CERN in Geneve, and also at various Norwegian sites. One of these was Norway's National Centre for Epilepsy (named "Statens Senter for Epilepsi" at the time). In a pioneering application the NORD-2B was used to process live electroencephalography (EEG) signals from patients to automatically detect and quantify certain types of epileptic seizures. 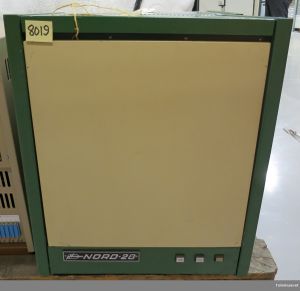 Year of introduction: Possibly 1970, or at least development finishing in 1970. From an article: "In 1970, ND teamed with Siemens and obtained a contract to build a packet-switching network (based on Norsk Data's new Nord 2B machines) for the Norwegian Air Force Supply Service." Also, the NORD-2B Hardware Manual is dated December 1970.

From "Shipping World and Shipbuilder", 1972: "Two NORD 2B computers (each with a 16k memory) communicate with each other through a data channel (ACM) and are connected to the process through a common I/O system. This makes it possible to run PAC functions on both computers."

This is a first shot at a list of remaining machines. Also machines that are known to be lost will be listed to make it easier to locate remaining ones. We don't have any production numbers yet.