NORD-50 Serial number 37 came to me from the Dalby datormuseum. I picked it up in August 2018. I will add to the history later on.

Judging from the dates on a random card, the computer was built in 1976. 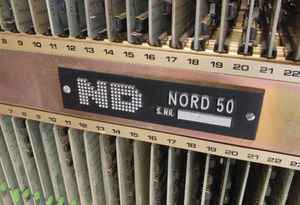 With the computer came a number of NORD-50 manuals I haven't seen before.

Other NORD-50 manuals on-line is.

The system is equipped with...

Looks almost complete, a few memory cards are missing in the Big Multi Port Memory but the remaining ones can be re-positioned to give a whole memory system.

I will go through the system and clean it up. I also have to go through the cards to check that none is placed in the wrong slot. Then I need a NORD-10 to connect to as an interface. It will probably take some time before I can even contemplate to run this machine.

Further inventory have revealed that I have no NORD-10 cards to connect a NORD-50. I have drawings of the cards though so if I can't find a card I might build one.