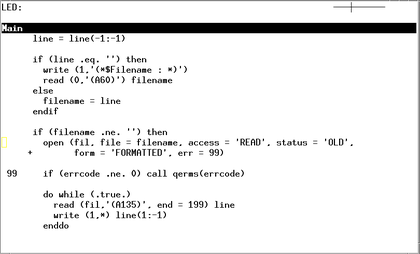 LED, the Language sensitive programmers' EDitor, was a powerful screen-based integrated text editor and debugger made by Norsk Data.

It was only available for the ND-500 architecture under SINTRAN III (there was no ND-100 version). LED took advantage of the special ND-NOTIS terminals made by Tandberg Data, but could, like PED, also be used with other terminals supported by VTM, e.g. the VT-100.